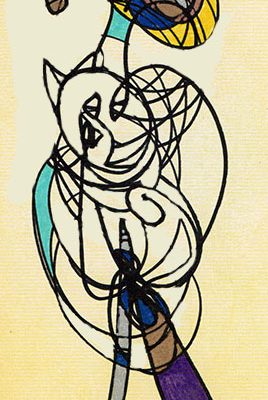 Video of sketch being done:

The overall theme of this reading: Poe is one of a party of three. Currently Poe is incarnated and the other two are his spirit helpers. It appears that they take turns in being the one incarnated. However they all benefit from the prizes given out for a successful journey/learning experience. At Poe’s journey’s end they will all be getting wings, with the one incarnating next getting physical wings as a bird! Don’t fear the ending of a chapter, rejoice in the success of a successful learning experience.

The spirits that came through to assist with this reading were the two cat plants themselves. I thank them from the bottom of my heart for the information they have provided in relation to Poe as we all, as a household, face the completion of his life book as a cat named Poe. I hope this means that the plants are happy with their current treatment! 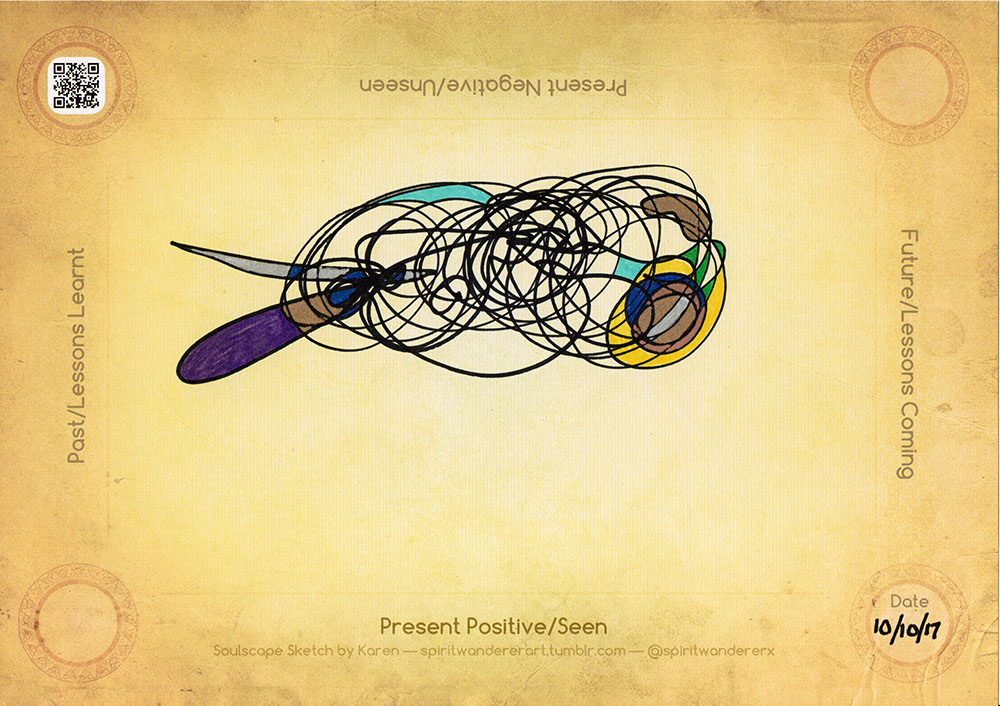 In this image I saw the picture of a two figures looking towards a figure in the bottom right that appears to have a blue head and is wearing a hat and a yellow top. The figure in the yellow top has removed the golden blindfold from the figure in the middle that is in spirit (and looks to have passed through a spirit tunnel). The outer shell/layer of this middle figure is coming off (like a coat with a hood worn – looking a bit like Little Red Riding Hood!). Following the middle figure is a regal warrior figure in a gold and purple outfit to the left that to me has a feminine energy and is carrying a long silver sword/staff. She also appears to have blue skin and is acting as an escort.

To me this represents the two spirits (looking to be from a place where blue skin is prevalent) that will be with Poe when he finally crosses the realm for good (he is terminally ill). They will help remove the layers from this physical realm (the golden blindfold / hooded raincoat) that were both good and bad for him. 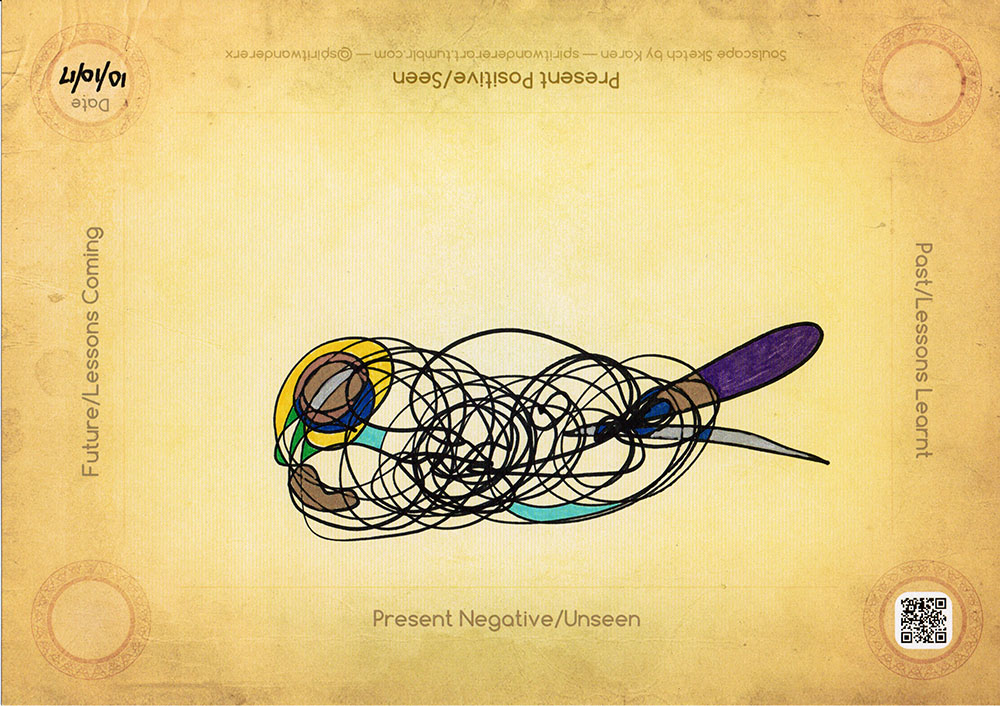 In this image I saw the picture of a cartoon type hero character pausing mid journey, they have lowered the spirit sword they were welding. They have stopped for breath as they are tired. This figure is asking a question (probably “So what now?”) of its two attendants (the speech bubble with a spiral). Now this figure has agreed to have assistance, one attendant is flying through a portal with a silver two handed blade to be with this figure and the other figure (to the left) is holding two energy shields in its hands to hold off incoming energies reaching the figure before they are ready to continue.

The figure that I suspect represents Poe is reaching the end of the energy he had to keep fighting like some kind of Pokemon superhero and has now resigning himself to consenting to accept the help from his spirit supporters while he takes a break and prepares for the next move. 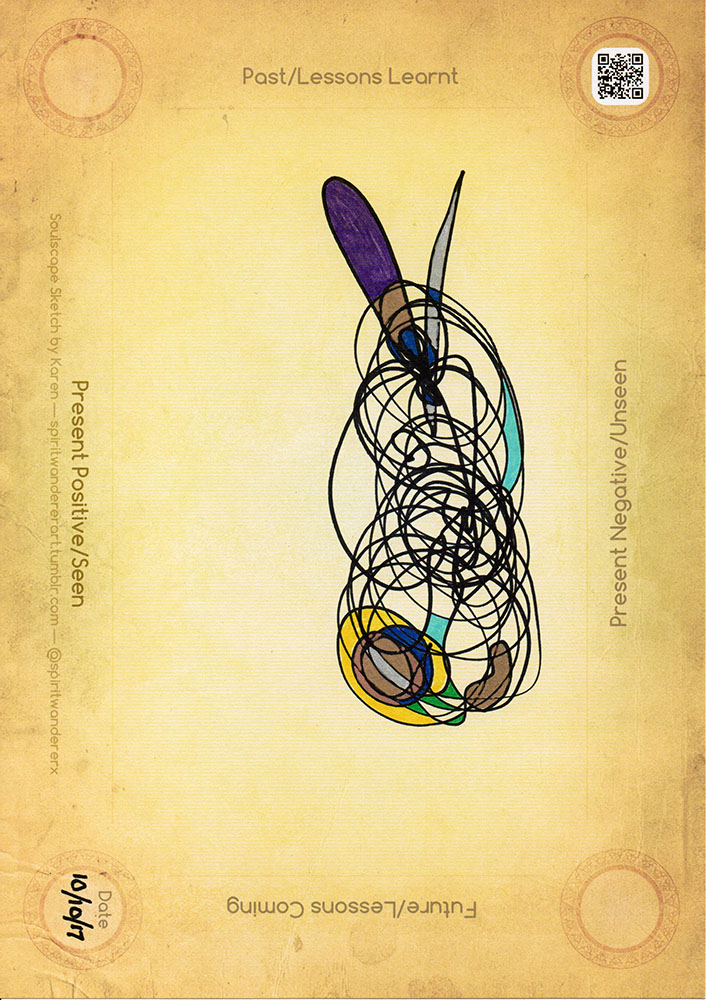 In this image I saw the picture of an animal figure (with a yellow body and green limbs and the tip of their tail). Their head was in spirit, but their body, from their throat area downwards, was in the physical realm/dimension. What I’m reading as their oversoul/higher self (figure with large head fully in spirit in the middle), was looking down at the animal figure almost like an assessment of their development so far (this look appears to lack emotion, as if it was being done with the emotion of an internal self-assessment/review of an outer reflection (like you would do when examining yourself in a mirror for presentability before going out). Connecting these two figures was a golden energy. Watching and monitoring this exchange overhead was an elemental figure with blue body who appeared to have surfed in on a silver board. 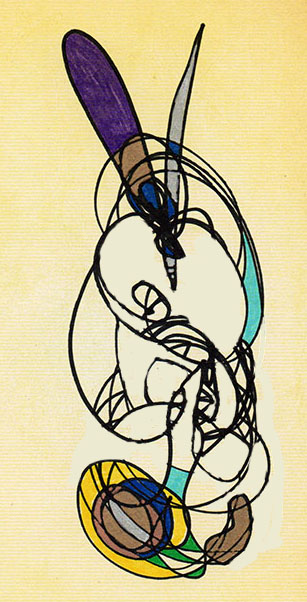 Poe’s Oversoul / Higher self was assessing the progress they had made through the part of themselves that was/is living as Poe. I believe they were reviewing how long this journey can continue for. Poe is very focal, so it is quite telling that around the throat of the animal figure is a spirit blue type collar. 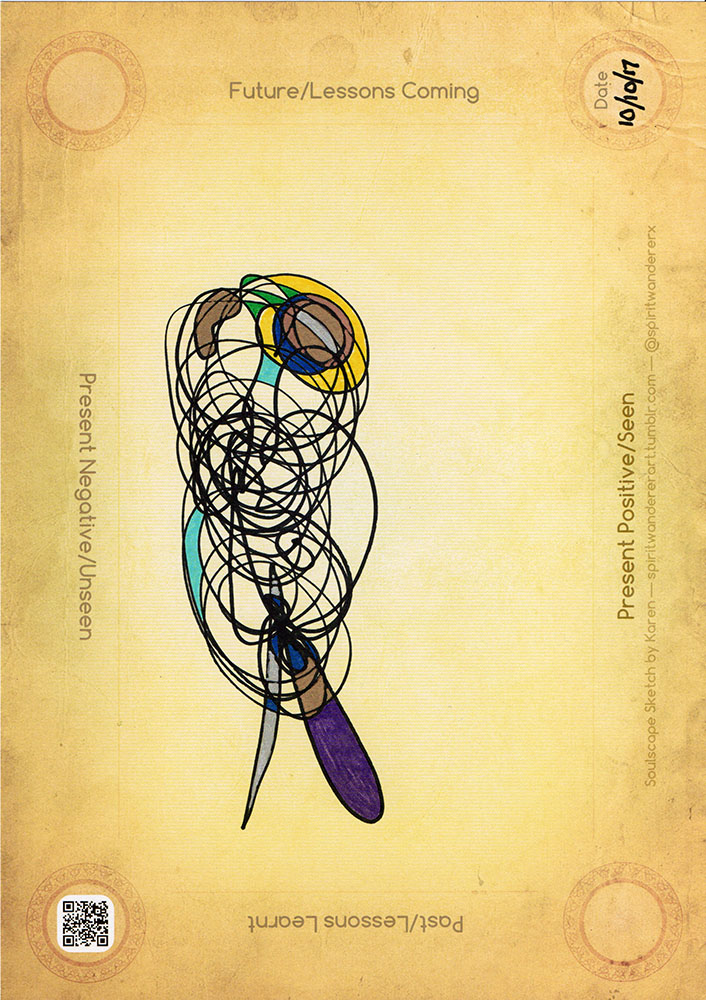 In this image I saw the picture of a winged spirit cat with three eyes open. Standing before them is the blue skinned elemental that has been with them through their journey. Now their work is done this figure takes a pause leaning on their silver staff before the next adventure begins. Behind the spirit cat is the coloured figure of a baby bird with the coloured markings of a Toucan. This bird figure has the spirit blue colour on their throat that the previous animal had.

To me this represents that Poe did well this lifetime! He will ascend, with all his eyes open and gain wings. He is looking forward to trying out being a bird (possibly with a yellow head and green beak) in the next adventure. Or maybe this is the life of the spirit that helped him and he will take turns in being the bird’s spirit guide!

Poe’s spirit guide (the fae warrior with the silver sword/staff in the gold and purple outfit – she has also gained wings from this journey) takes the opportunity to take a break before the next adventure starts.