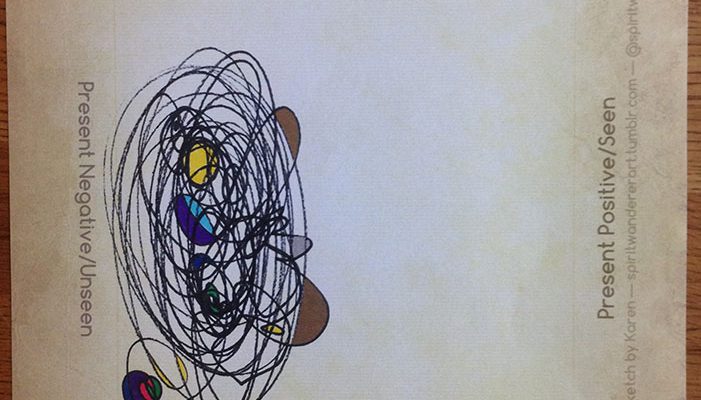 The overall theme of this reading: Things are settling down after a whirlwind period of everything being up in the air and spinning around. After a period of feeling caged and peered at, Harlequin now feels more settled and freer to explore while being monitored less.

The spirit that came through to assist with this reading was Harlequin herself. Harlequin was more confident of the process since the last time we did this together and feels more emotionally able to do it too since the move to Berlin. Harlequin put her cat body in a human shaped harness so she could hug me and do the drawing. 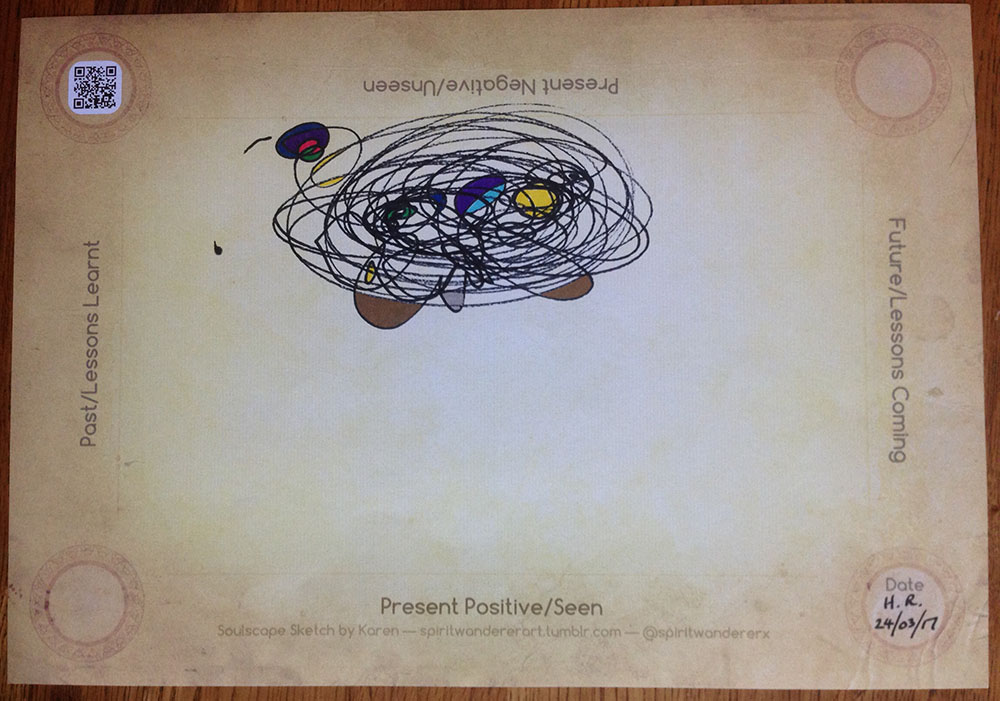 In this image I saw the picture of a Toothless shaped dragon with a green eye. This figure of Toothless is inside a ball of chaos. Things have been moving around Harlequin like a hurricane/tornado but she has kept herself in the middle of the chaos by being grounded (big gold feet on the ground and a sliver like cord into the Earth). To prevent herself from becoming dizzy, from the chaos going on around her, Harlequin has been focusing on pretty things (like a flower) that have been outside the chaos (like a dancer who focuses on a spot when spinning). Harlequin’s favourite things are around her but they have been caught up in the hurricane/tornado. 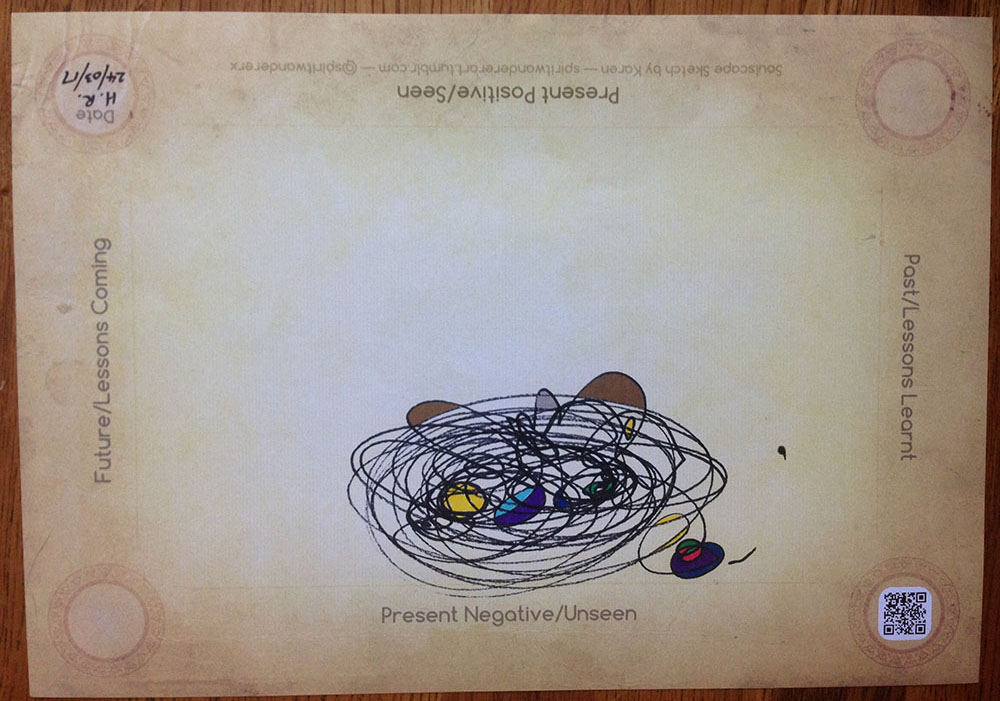 In this image I saw the picture of a figure of a butterfly with golden wing tips emerging from the chaos of a whirlpool below. Like a flood that it is now receding, a silver mountain top is emerging in the distance and few of its favourite possessions are now resting still on land. The other favourite possessions have been brought closer together and to the butterfly due to the swirling of the whirlpool that is now draining away. 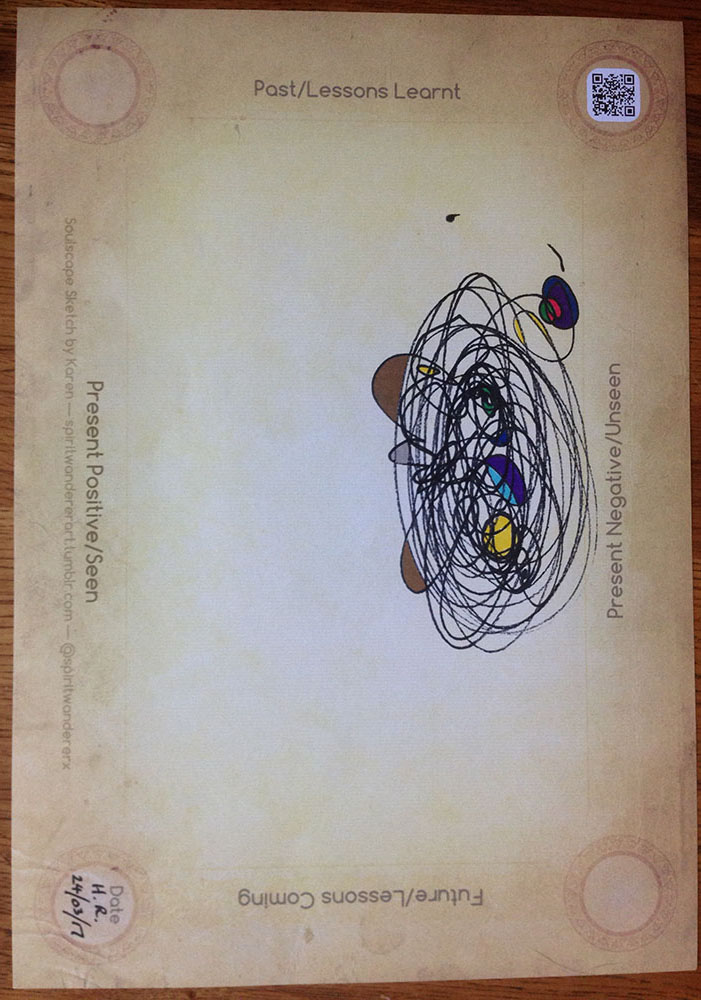 In this image I saw the picture of a pretty bird (with a green eye and blue mouth) kept in a cage. Harlequin felt like a pretty bird/butterfly kept in a cage. With a few belongings with her to keep her company. Harlequin felt peered at (there is a face in the top right peering into the cage) and closely monitored. This face had green and pink eyes (loving and nurturing) with a spiritual thinking. While in this cage she felt it important to hide the bright yellow egg from view of the observer. 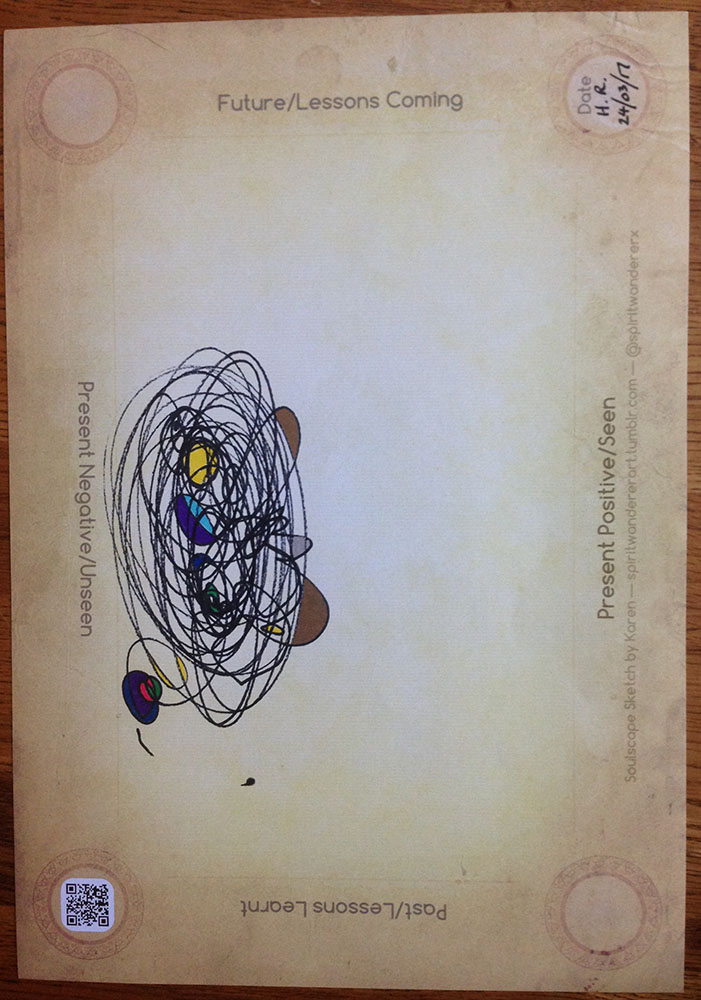 In this image I saw the picture of a the bird/butterfly working its way through the tunnel of chaos to calmer times ahead. Like being in a chrysalis, Harlie has had time to develop some of her chakras. The yellow ball/egg that was previously hidden from view is now shown on her left shoulder (or could represent a fully formed sacral chakra – placed near the neck area for communication). Harlie is feeling less monitored as the person who has been looking at her, is now contemplating themselves (bottom left). However, Harlie knows where this person is should she need them.
Harlequin doesn’t know what to expect from the next part of her journey, but she has her favourite possessions with her and feels more secure and freer now.

Liked this reading? Have you checked out KaKe Readings yet? https://www.facebook.com/KaKeReadings