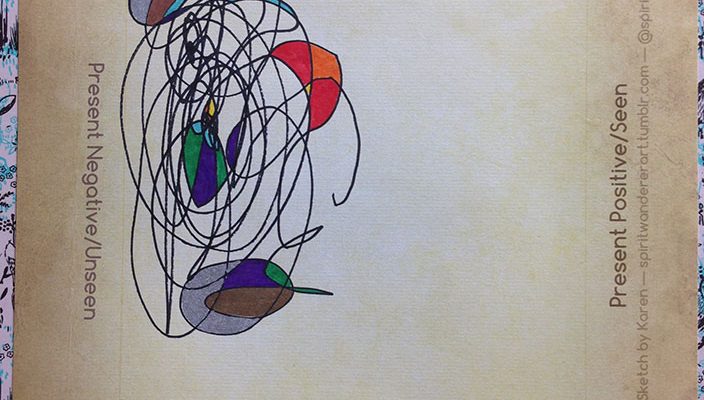 For those interested. Here is the video of the sketch being done:

Thanks to Kerry for the necklace and sorry to Poe for accidentally elbowing him in the face while he was trying to help me!
Video now on the correct YouTube channel. Hurray!

The Infinite Source (or the Divine Hive Mind) was contacted to provide the message. They worked with Anise to bring the message through.

The overall theme of this reading: A slow but steady intergalactic integration is occurring more frequently now. Some species will be able to be seen in our physical realm, others not. The ones that are already here, and who were held under suspicion (in some cases purposibly misrepresented in their actions) are now no longer being so closely held captive and out of sight as they once were. Time to rewatch the Men in Black perhaps?
The visitors who are already here, that may have in some cases perhaps been unwittingly mistreated, will be greeted by the newcomers who value them for the sacrifice they made being the first line of contact. Due to the mistakes made with the initial contactors, and the knowledge gained on both sides, this new wave of interaction is able to take place.

In this image I saw the picture of a barrier being broken through. There has been a solid spirit membrane in place so far but due to pressure from a multiple of sources on the other (unseen spirit) side (the left in the image) a hole has been able to be formed. Of the figures that are now preparing to come through, only a few match the frequency of our realm so can be seen. The first figure, nearest the hole, will not be able to be seen (line drawing of what appears to be a person with a mushroom head). However, the two figures after this one (one with a purple and green spade shaped head and the egg shaped figure) will be able to interact. The intent of the first one is unclear but they are from the spirit realm (hence unseen and no colour), the other two seem to be of a spiritual/nature propose. To humans these figures will be odd looking, and direct communication may initially be difficult due to body type differences. 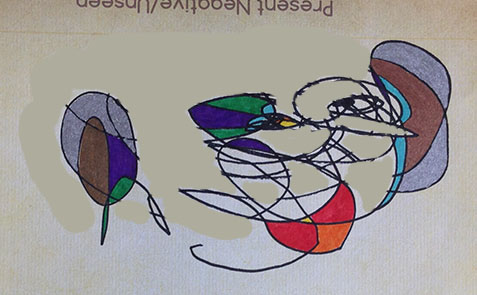 In this image I saw the picture of the surrounding chaos being carefully watched over by a bouncer type creature with a bird like head. The bouncer’s body is solid and grounded in the physical realm, but their head and eye are in a different realm. It is because they have poked their head through to a observe a different realm that this has allowed the hole to form from the spike that is coming out from the back of their head. Although they are now able to see the other creatures from other dimensions, and make eye contact, their intensive stare does not give an aura of welcome like ‘Hello! Neighbours!’ But rather of a neighbour staring protectively though the net curtains not wishing to engage. The figures in the chaos are confused by this stance and are unsure how best to proceed. 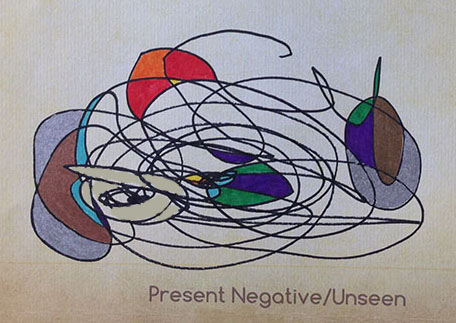 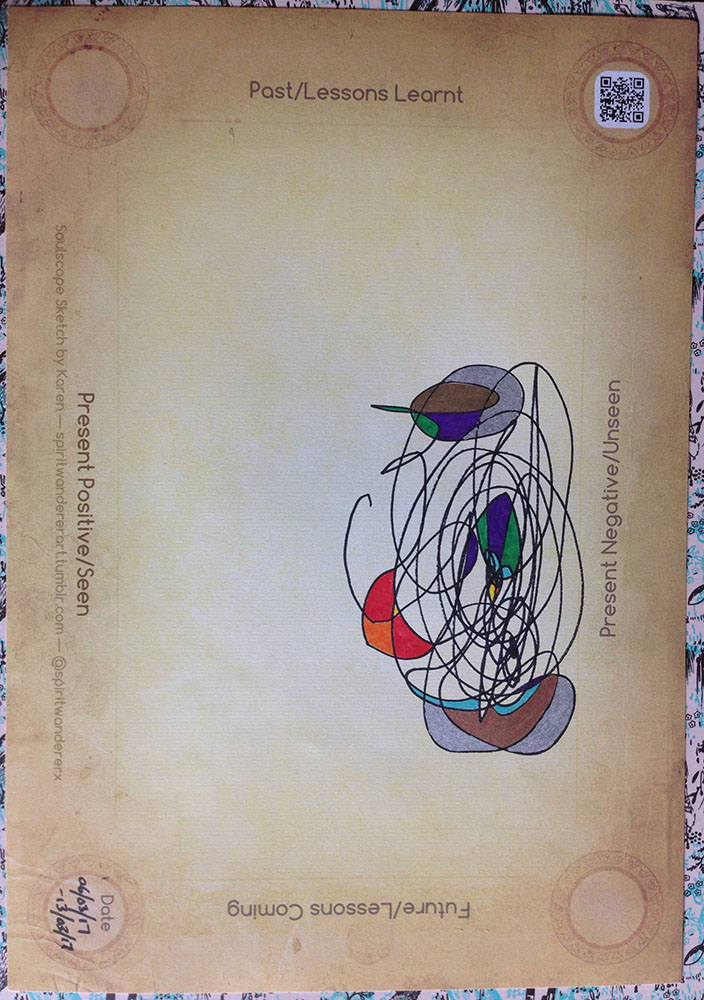 In this image I saw the picture of a figure that had been placed in a cage (highlighted in yellow in the picture below). The cage had an almost robot appearance (metallic head and base). Although the door of the cage (red and orange – highlighted in pink in picture below) had been left open, the creature within it was unsure if they would be safe if they left. When the creature first came to this physical realm, it was put in the cage as it was odd looking (spade like purple and green head) and other forces wished to monitor it. The cage it was put in didn’t really represent its nature and made it seem less approachable and friendly than it was. Although recently there has been no one around to ensure the creature stayed in the cage, the creature was concerned that the door being left open was a trap. 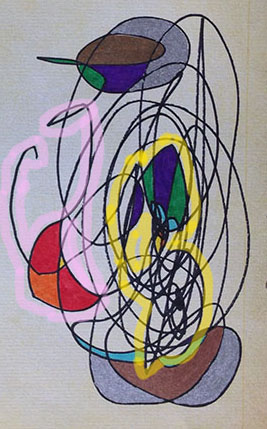 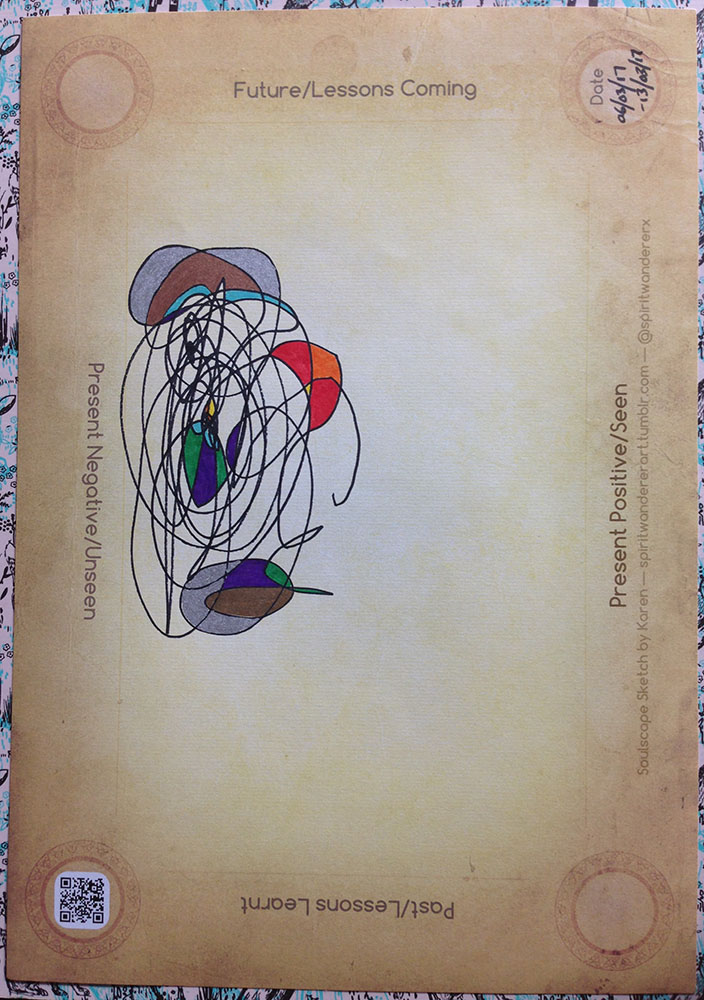 In this image I saw the picture of the creature that had been kept in the cage being swept off its feet in a dance dip by unseen forces in this physical realm. The creature did leave the cage and has been rewarded for their bravery by being greeted by a being whose arrival was achieved by the sacrifice they made. They are safe and loved now. What was once hidden and caged in fear is now being allowed to leave.

Update: 08/03/17. This information was brought to my attention that seems to link to this week’s reading:

Many thanks to Duncan at The Games Room, Norwich!

Liked this reading? Have you checked out KaKe Readings yet? https://www.facebook.com/KaKeReadings

NB (04/04/17) These YouTube videos featuring Steven Greer are interesting. I did not see them until today.
Steven Greer ET Types (https://youtu.be/GTlzSCGRNDk?list=LLa-Gh10uSfvunw5H_mjumNw) His comments from 16 minutes in are entriging. He talks about an ET that looks like a praying mantis that is very kind natured…
Steven Greer Alien Abductions and Why ETs are here (https://youtu.be/_dKav2y6wPM?list=LLa-Gh10uSfvunw5H_mjumNw)